Sassy Polish & Scrubs just opened up shop this past April, and the lovely owner Danielle Nesbitt contacted me to do a review. I chose 7 of her polishes (she also sells body scrubs) for a nice discount. This post will feature the first 3 I chose: Beach Glass, Penny Lane, and Dandelion.

So here goes! First up is Beach Glass, which is a nude polish that has some pink iridescence and subtle shimmer/ glitter. It’s a very pretty color! However, the formula was not great. It was a bit gloopy and difficult to apply evenly, and it bubbled on me a bit. I didn’t try it with polish thinner yet, which I’ll have to try since I really like the color!

And here’s a picture in direct sunlight that shows off the pink undertones more! 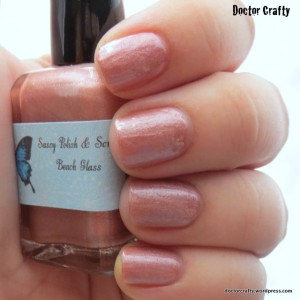 Next up is Penny Lane, which is a gorgeous copper shimmery polish with a bit of subtle scattered holo. It also almost has a bit of duochrome to it, with some lights catching a greenish tint. I really like this polish! The formula was much better on Penny Lane, but there was still a bit of difficulty getting a nice smooth application. It evened out nicely with top coat though!

And here’s a pic that almost captures that greenish tint:

Last up for today is Dandelion. Now, when I shopped for this it was described as a “clearish off-white linear holo stunner with tiny yellow and green glitters.” Obviously from my pics, you can tell I did not receive that polish. I instead got a minty crelly with some subtle holo and little teal glitter. I really didn’t mind that since minty teal is my favorite color, but I did want to try the original Dandelion.

I contacted Danielle about this, and the conclusion we came to was that she accidentally sent me a one-of-a-kind mixture she made for herself. She likes to take the remnants of batches and add to them to make little one-of-a-kinds for herself. She thinks that this was a bit of the original Dandelion plus some mint green mica and teal glitter. 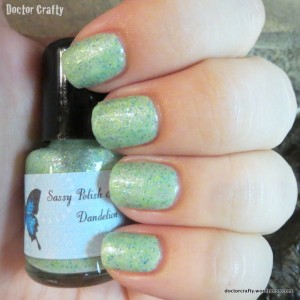 This formula, like Beach Glass, was a bit of a pain. It was gloopy and difficult to apply in a smooth layer. Such a gorgeous color – I was sad that it wasn’t easier to apply. It was also a bit on the sheer side. I applied 2-3 coats and there’s still a bit of visible nail line. Again, I haven’t tried polish thinner yet which I’ll have to do since I really like the color.

So these 3 polishes I just showed weren’t my favorites in the bunch, but they are stunning colors and I’ll have to try some thinner to see if that improves things. I told Danielle about the formula issues I had, and she did say that Penny Lane can be a bit temperamental with the mica and that perhaps the bottles I received just hadn’t been mixed as well as they should have.

Either way, she creates some absolutely gorgeous colors and I certainly don’t hold some formula issues against a new indie brand. I’m really hoping that some thinner will fix the issues I had!

Stay tuned for Part 2, where I highlight 4 more of her polishes that were my favorites of the bunch! Here’s a quick sneak peek of the others: